November 09 2017 - IRCC has invited 2,000 candidates in the Express Entry pool’s 77th draw for Canadian PR this Wednesday, the November 8th. The lowest-ranked candidate who secured 458 points was issued an Invitation to Apply (ITA). Last week 795 candidates were issued ITA under program-specific draws. This may be one factor that has contributed to the relatively low number of candidates invited and increase in the CRS cut off level in the latest draw.

October 9 2017 - Nova Scotia Provincial government has invited applications for the PNP category. It will accept 300 more applications through the Nova Scotia occupations in Demand Express Entry stream, starting at 9 a.m. local time (8 a.m. EST) on Wednesday, October 11. Applications will be accepted under Category B of the stream for which job offer is not mandatory, Although eligible candidates for the occupations in demand should have work experience in the respective field.

October 4 2017 - Round 23 of 2017 Express Entry Draw was declared today by Canadian Immigration authority, hence inviting 2801 new applicants to apply for attaining permanent residency. October 4th draw was taken out through Comprehensive Ranking System (CRS) at a score of 438, which is 5 points higher than the previous draw which came out on September 20th. 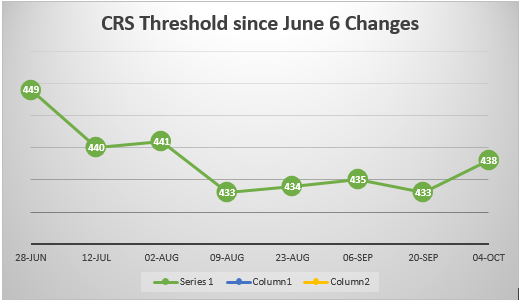 Sitting in Express Entry Pool from quite a while? Opt PNP pathway for Canadian Immigration

Are you disappointed because you did not receive Invitation to Apply under Express Entry System? Are you sitting in Express Entry Pool from long time? Well, don’t be disheartened, rather try to explore other ways to achieve your dream. One of the best ways to crack through CRS ranking is to get an approved Provincial nomination. Let’s get an oversight of Provincial nominee programs and see how it can come to your aid.

Almost every Canadian province has Provincial Nominee Program, designed to lure specific potential immigrants to their specific province. Each province has its own set of criteria by which they determine eligibility and invite most deserving candidates to apply for nomination in their province, eventually getting PR. These programs operate in coordination with federal government. Few of the popular Provincial Nominee Programs of Canada are:-

How does PNP work?

Every province have a different approach to eligibility criterion. Provinces select the best suitable candidates and send them Invitation to apply. Each province has an annual quota for nominating applicants. Once the Quota is filled, that province does not offer any more ITA’s. Most provinces require to have a job offer from an employer in that province, but there are few that have in-demand job category.

Every Provincial Nominee Program (PNP) have different streams to invite applicants for nomination. Most of the PNP’s have a popular Express Entry stream, through which, they have access to notify candidates registered in express entry pool to apply in the PNP.

The Provincial Nominee Programs (PNPs) remain the key alternate pathways if you are not getting the express entry invitation in view of low CRS score. If you seek professional advice and assistance to apply in PNP, you may contact certified Canadian Immigration Expert.

October 11 2017 - PNP Category for Nova Scotia got overwhelming response as the application demanded were filled with in hours. Nova Scotia government had invited 300applications through the occupations in Demand Express Entry stream. Interested candidates shall wait for the next pool.

October 11, 2017 - The Government of Canada has made the following changes for the citizenship of Canada • Required physical presence in Canada reduced to 3 out of 5 years • Days spent in Canada before becoming a permanent resident, within 5 years of applying for citizenship, count as half days (up to 365 days) towards physical presence requirements • Age range for language and knowledge requirements reduced to 18-54 years old • Time required for applicants to file income taxes before applying for citizenship is reduced to 3 out of 5 years

How to enter the Express Entry pool

“Before you can compete with others in the Express Entry pool for a coveted invitation to apply, it is important to get a thorough assessment of your eligibility and your potential options for improvement thereafter. Then, it is important to prepare documentation so that when you are invited, you are ready.”

Filing your PR application and the whole process involved in it can be too technical for your understanding, hence, it is in your best interest to coordinate with the certified Canadian Immigration expert to get the best assistance to apply.